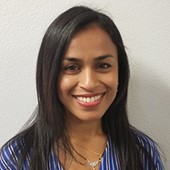 LMC Pathology Services, a Sonic Healthcare Anatomic Pathology Practice is privileged to include Alpa Bharat Shah, M.P.H., M.D., as a member of our medical staff. An award-winning scholar, Dr. Shah has an impressive academic training with an extensive range of experience.

Dr. Shah graduated from Northwestern University in Evanston, Illinois with a Bachelor of Arts degree in physical anthropology and human biology. She attended the University of California, Los Angeles School of Public Health, where she earned her Master of Public Health degree and the award for best student paper. She then received her medical degree from the Ross University School of Medicine in Dominica, West Indies.

Dr. Shah later served a four-year anatomic and clinical pathology residency at Henry Ford Hospital in Detroit, Michigan, where she served as chief resident and won the second place prize at the 22nd Annual Medical Education Research Forum. She went on to complete a surgical oncologic pathology fellowship at the Memorial Sloan-Kettering Cancer Center in New York City.

During her time at Henry Ford Hospital, Dr. Shah volunteered her medical expertise to several committees, such as the resident wellness task force and the antimicrobial subcommittee. Here, she was also a member of the program evaluation committee, helping to assess and improve resident student courses and projects; and the laboratory utilization task force, where she participated in a major effort to identify patterns of clinically unnecessary red blood cell transfusion.

Dr. Shah is member of several professional medical organizations, including the American College of Healthcare Executives and the United States and Canadian Academy of Pathology.

Dr. Shah holds full medical licensure and is board certified in anatomic and clinical pathology.