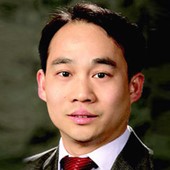 University Pathologists, a Sonic Healthcare Anatomic Pathology Practice, is privileged to include Xin He, M.D., Ph.D., F.C.A.P., as a member of its dynamic medical staff. Dr. He has an extensive academic and medical professional background.

Dr. He earned his Bachelor of Medicine degree from Nanhua University School of Medicine in Hengyang, Hunan, China, graduating with first class honors. He then went on to receive his Master of Science degree from Shanghai Jiaotong University in Shanghai China, graduating with first class honors. He completed his PhD at the University of Pittsburgh School of Medicine in Pittsburgh, Pennsylvania. Subsequently, he began his postgraduate training with a pathology residency at the Rhode Island Hospital of Brown University Warren Alpert Medical School, in Providence. He then completed a cytopathology fellowship at the Cleveland Clinic in Ohio, followed by a gastrointestinal and liver pathology fellowship at the UMass Medical Center in Worcester, Massachusetts, thus concluding his postgraduate training.

Dr. He has held key medical research and teaching positions and received various honors for his work. He has been awarded the top prize for the Chinese Medical Science and Technology Award by the Chinese Medical Association and was a recipient of the Best Abstract Award for Pathologists- in-Training from the Chinese American Pathologists Association. He was an instructor in medicine at Shanghai Jiaotong University in China, a fellow and research associate at the Genomic Medical Institute for the Cleveland Clinic, and a director of resident education in pathology at Brown University, prior to his position with University Pathologists.

Over the years, Dr. He has developed extensive professional experience. He holds medical research publications and articles in peer-reviewed medical journals, as well as oral and poster presentations at professional medical meetings and conferences. He is an active member of the American Medical Association, College of American Pathologists, and the United States and Canadian Academy of Pathology.